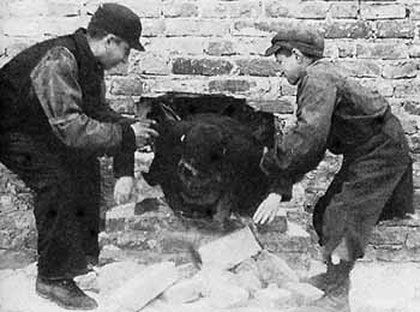 Judd Teller, a Modernist who was very familiar with the works of other early Modern American poets, responds in this poem both to Ezra Pound’s great interest in ancient Chinese Poetry, and to Pound’s treatise on poetry, as it is phrased by Pound’s colleague and linguist, Ernest Fenollosa. Fenollosa’s article, “The Chinese Written Character as a Medium for Poetry,” which was published and edited by Ezra Pound in 1918, lays out the basis for a modern poetry that consists of “strong verbs” and “concrete metaphors” –- a poetry that avoids the abstraction of infinitives, and which transcends the boundaries that are created by the inflexible assignment of speech parts in Western Grammar. The article calls for the preference transitive to intransitive verbs, the avoidance of negations, and the adoption of objective, rather than subjective point of views. As an example, the article presents the sentence “Farmer pounds rice,” arguing against the essential relation of subjugation between the farmer and the rice, and presenting all three participants: the farmer, the rice, and the poet (Pound) who mitigates between the two, as equal participants within the ongoing processes of the universe.

Teller applies these principles to his poem, but finally subverts them. The further he uses ‘direct,’ ‘transitive,’ and ‘positive’ verbs, the further it is clear that the ‘democratic’ reading of the sentence, “Farmer pounds rice,” is impossible when one writes “as rice,” from the point of view of the one who is being beaten. Teller demonstrates the injustice that is laid in the ‘democratic’ portrayal of subject and object, which erases the power relation that exists between the two. In doing so, he points out to a certain moral insensitivity in a discourse of ‘powerful’ poetry, which does not take into account the impact of such power. And, writing from the point of view of ‘pounded rice,’ Teller is perhaps able to point out an early stage in a process of transcending ‘conventional norms’ that takes Pound from the peaceful Cathay to the seemingly inexplicable hate-speech of his radio broadcasts during the Second World War.