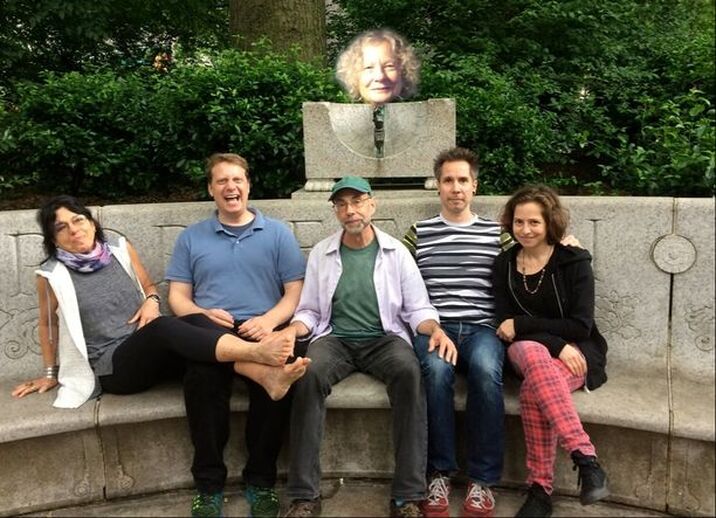 By Way of Introduction
​Eric Darton
​​

This first offering in a series of planned “pocket anthologies” collects work in process by Michael Hawley, BJ Atwood-Fukuda, Jan Schmidt, Denise Milstein and Hardy Griffin, the five current members of Writing at the Crossroads – familiarly known as Writing X – a prose workshop based in New York City.

Begun in 1997, Writing X met weekly (with summers off for good behavior) until 2006. After a hiatus of several years, the workshop reconvened with three of the founding members joined by two new participants.

The originating intention behind Writing X carries through to the present. The workshop was designed for and has attracted accomplished writers who find that a group dynamic lends support to their individual practices. In addition the workshop affords a deep level of engagement in the creative processes of others. Over time, this critical give-and-take allows one to operate even more efficaciously within the field of one’s own writing.

Though its members work together intensively, the group does not produce writing of a discernable “brand.” The approaches to narrative you will read below are as diverse as the themes and subjects treated. Each of these writers has developed a mode of expression unto his or herself, yet all their work is characterized by emotional complexity and attention to craft. The best analogy I can think of is to various forms of martial arts, each of which is based on a set of core principles that manifest in distinct and recognizable forms. Having attained a certain level, training with adepts of differing styles helps solidify one’s own practice. The commonality among these writers stems from the rigor with which they apply language – whether plain-spoken, allusive, or deliberately disjunctive – to the task of describing reality.

I would like to say a few prefatory words about each of these writers, preceded by a short passage from their contribution to this collection. Far from attempting to define their work, my wish is to draw attention to the variety and efficacy of the approaches they take to practicing the art of fiction.

People are everywhere sooner or later. I am convinced there is not a leaf on earth that
has not been bruised by human fingers, not a stone unmuddied by the feet of men.
When you spot a twisted root in the forest, you can be sure that some fool tripped over it.
Even the clouds have a sullied quality, seem to take the shapes of man’s inventions. Or
have I just lived too long?

Part of what lends Michael Hawley’s work its compelling, hypnotic and often disconcerting quality, is his ability to seamlessly blend the uncanny and the sublime, to infuse mythological and historical subjects with a materiality that is both immediate and palpable. All these attributes, rather than feeling like superimpositions over a form, seem to emanate directly from the core of a meticulously designed, yet deep internal armature which one senses as alive and moving beneath the visible prose.
To distill it to a phrase, Hawley reveals the classical in the embrace of the protean, unfrozen, and caught in the act of transforming.

I’m late getting to work. I see my bus on the corner. I take off, a real sprint. Knees
pumping high in my work clothes, pounding the cement in my platform clogs, dodging
in and around the folks taking their children to school, shopping at the Korean market,
hanging out in front of the methadone clinic. The bus lurches into the stop, just yards
away. I run right out of my shoes, stumble, black clogs turned over, bare feet on the
tarmac, put the clogs back on, run, jump onto the bus, laughing, because I found my son
and nothing can get to me now.
The bus driver, smiling, gives me a lecture on heart attacks. I want to tell the bus driver
about my son. I want to tell my son about the bus driver…

Though one would be hard pressed find parallels at the level of situation or style, there is something at the heart of Jan Schmidt’s writing that brings into our moment something of the encompassing quality of certain 19th century Russian literature. By this I mean that, in dealing with the conundrum of what it is to be “modern,” her narrators have made themselves available to the whole of human experience. Her tales are characterized by a clear-sighted appreciation of today’s people as they are, rather than as they should be; she represents them in all their complexity and paradox, shorn of idealization, yet fully endowed with vital and uniquely constituted natures. Thus her characters, even the most damaged and dangerous among them, remain, to paraphrase the title of B.J. Atwood-Fukuda’s piece, “fellow breathers of the common air.”

She wondered sometimes, when she heard a certain kind of cry outside her window
late at night, if it wasn’t all in her imagination.
Not unlike so many of her memories.
How to know? Such a fine line.
All of lived life a mere marring of the boundary between memory and imagination,
however momentary in geologic time. A smudge shot through with flashes of light.
Roars of thunder?
The sound invariably coming from the roof of the underground garage.
Though when she peered out the window and gazed down across its sprawl of
concrete slab – an empty platform slated, every now and then, for flower beds and
strolling paths – she never saw a thing.

B.J. Atwood-Fukuda’s work calls out the dichotomy between her subjects’ internally felt and externally perceived worlds as sharply and skillfully as that of any writer I have read. Though soaring and vertiginous passages alternate to great emotional effect throughout her stories, when you have encompassed one of her pieces in its totality and, metaphorically, taken a step back, it comes to resemble a Chinese vase that has been shattered, then painstakingly fitted back together. The resulting form retains its graceful shape, even its functionality, but it speaks, in exquisitely fractal language, to an unimaginably violent biography.

“Don’t stop, keep writing,” she says.
What can I write? Now it’s out there – that’s what this day’s all about. I finally wanted
to speak about dad but it seems there’s nothing to say.
“Well, you could start by saying he’s dead. That’s ‘not nothing’ as you’d put it.”
But that’s the thing, it is nothing – he’s nothing. If I’d known him when he was alive,
then there would be something – a hole or pain or anger. Mom wants me to get into it
but that’s like asking a bushman what it’s like not having a TV your whole life.
“A father’s not a television.” So, she’s still reading this over my shoulder.

Hardy Griffin’s work pulls the reader into its hidden dimensionality by assuming a calm surface. So reassuring is his generous and forthright voicing that it may take a dozen pages before the reader recognizes that she or he has entered a zone of reality far more profound and conflictual than it appeared at the outset, and filled with turbulent, and at times terrifying, undercurrents. We become gradually aware, as the narrative bears us along and the characters manifest themselves in ever higher relief, that not only has story itself taken unexpected turnings, but that we have passed the point of engagement and become inextricably implicated.

They had started traveling there together once the fathers were taken, when Héctor was
five and Mateo four. At first the boys fought constantly and Lucía sulked, too old for the
boys’ games and too young to share in the complicity of the two women. Estela
sometimes lost her patience and yelled so desperately at her kids that Héctor got scared.
Then Odile would lay a hand on Estela’s arm and lead her away from the children, who
would also move away from one another, into their individual worlds. In those
moments, the missing fathers became evident like a hole in a seam, revealed when an
arm stretches up, or a rip that spreads on jeans when a knee bends. That’s how Héctor
thought of them all, and especially of himself: as worn out clothing that no one could
patch.

Denise Milstein’s novel, for all its metaphorical richness and the manifest beauty of its imagery, claims its ground in the arena of personal and social struggle. Her overarching theme is the necessary crisis every young person must face if they are to survive: that of attempting to cohere a durable self despite any and all vicissitudes. In this sense, her work resonates with the novels of James Baldwin. I am thinking especially of Just Above My Head (1978). Elements of her book, including the interplay of atmosphere, psychology and moral accountability remind me of a radically desentimentalized Dickens.

I hope these notes have provide some sense of the nature of the works to follow.
It has been and continues to be an honor and a delight to engage over time with the ever-evolving work of these writers, and to facilitate each week – with summers off for detour and frolic – the ongoing work of the group.